The failure mode is always a hot topic!

How do we determine the load bearing capability of our Composite columns? We load them up in a 250-tonne capacity test rig. Gradually we apply a compressive load. This is until failure. At that point, you will hear a very loud bang as the column delaminates. The failure mode is instant. It has limited audible warning signs.

Initially when loading our 25-tonne stand (version 1.0) to its ultimate capacity. Column failure would present at around 110-tonnes. Withstanding upwards of +4 times its rated load capacity. A significant increase on the minimum requirement of the Australian Standard AS 2538:2016 that it complies with. The standard requires a 3 x safety factor.

We introduced these measures to the greatest magnitude that we could. To safeguard the users and our product. That was all before we developed the 2.0 column configuration.

Since then our research and development team have tried and tested various ways to improve the products performance. Resulting in the increase of both the load bearing ability and the resistance against lateral movement. You will see this from the test results that I have included. Remarkably, our 25t stand (version 2.0) now supports an even more significant load before failure. Subsequent to the failure it has the capacity to support a reduced load. 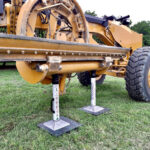 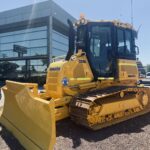 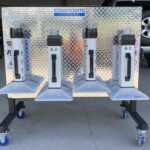