How does a fully engaged Composite Stand support a compressive load?

Here is an overview for the working nature of composite materials in this application. Movement in the column during load take-up is a function of the composite fibres being forced into tension to support the desired load. Returning to its original state when unloaded, much like a synthetic sling, stretches when in use and relaxing when unloaded.

Several hundred core fibres make up our composite column. Each core contains thousands of individual fibres. These fibres are all held in place by a resin compound that is formed into shape under high pressure and temperature during the manufacturing process.

However, the design and manufacture of the composite column sections in our stands are very different from other composite products. Pultruded or otherwise. Conventional pultruded composite products typically contain only longitudinal fibres. This is not the case in our composite column sections. A unique layup combination multi-directional fibres are used in the manufacturing process. Where the compressive load is ‘taken up’ by the column and the fibres engage under tension.

Therefore, the Composite Stand supports a compressive load when the fibres in the composite column are fully engaged under tension. It will initially compress slightly until the thousands of fibres resisting the force in that direction come under enough tension. They then become engaged as a supported load transfers its force (i.e. weight) downwards onto the composite support column. Thereafter, the whole column has a significant overall compressive strength.

Over the length of the column it is possible to observe lateral movement as a function of the fibres and tension as mentioned above. In addition to the 150t (3 times rated load) Overload Testing during Certification. A load of 75t (1.5 times rated load) is also applied to the edge of the top of the stand. It’s part of the structural integrity certification testing. This is where the column exhibits somewhat similar deflection characteristics to those in this image.

That being said, we wouldn’t expect to see bowing as illustrated in the image unless the truck has moved. It may also happen if the fall on the floor is at a significantly different angle. Due to the supported surface on the machine.

Composite Stands | GET YOUR GEAR OFF the ground 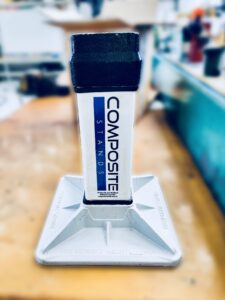 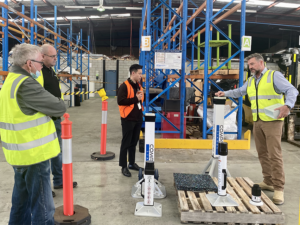 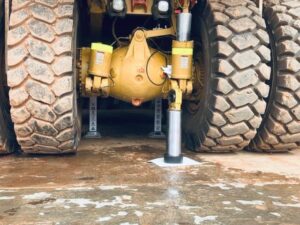 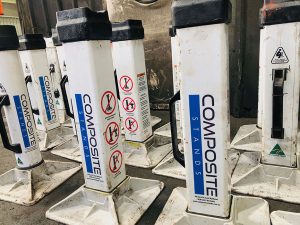 WithSTANDing The Test Of Time 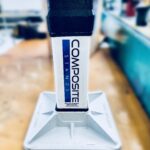 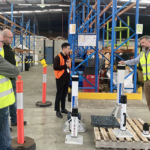 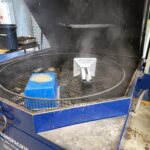